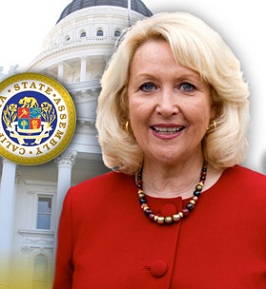 "Today’s grim forecast of a $25.4 billion budget deficit is a powerful reminder that the Legislature needs to take immediate action to reduce spending and balance the budget. Democrats and Republicans must work together to make the tough but realistic decisions on spending priorities required to close the deficit. The people of California have repeatedly made it clear that they don’t want to pay higher taxes to fund Sacramento’s budget mistakes. Republicans will fight any effort to raise taxes to fund more irresponsible overspending. I stand ready to work with Governor-Elect Brown and our Democrat colleagues to find budget consensus, and take action without delay to get spending under control and pass the honest, no-tax budget Californians deserve." via cagop.org Capitol Update

◼ California’s Assorted Rocks and Hard Places - Victor Davis Hanson
News came out on Thursday that the California budget deficit is actually closer to $25 billion, twice what we are told. This follows from last year’s $42 billion shortfall, which was closed by all sorts of one-time tax increases and gimmicks. Here is our general dilemma in a nutshell.

The Los Angeles Times reports that the state owes $8.6 billion already, and will have to come up with a $362-million payment to Washington by the end of next September.

◼ What does the market know about California's finances that the rest of us don't? - Doug Ross at The Journal

LOCALLY:
◼ 'A horrible, horrible mess': State budget back in the red, lawmakers called to special session - Times-Standard
"It doesn't really make sense for a lame duck governor to be doing this,” said Noreen Evans, who next month will take the 2nd District State Senate seat currently held by Patricia Wiggins."... Evans said it might be time to hand off some state services to the county and city levels, where voters have been more open to passing tax increases.

North Coast Assemblyman Wesley Chesbro, D-Arcata, is on vacation and was not immediately available for comment Friday, according to his spokesman.
at 2:54 PM

The unlikely emergence of Chris Christie proves once again that you can never tell who is going to take off in the public imagination. The New Jersey governor not only rocked on the 2010 campaign trail, he quickly became a regular on short lists of Republican presidential prospects.

These are the future leaders of the Republican Party

◼ Republicans all across the country are ready to blaze new trails by providing fresh young leadership on the national, state, and local level. From the GOP Young Guns to RNC Women's Candidate Spotlight to RNC Coalitions' Candidates Breaking New Ground, these Republicans know that the government is here to serve you, not the other way around.

Republicans gained at least 60 seats in the House... the biggest swing in the party’s favor since 1938.

◼ And - Republicans Are Poised to Increase U.S. House Gains in Undecided Contests
“It’s expected that Republicans will hold on and pick up a total of 63 or 64 seats, though recounts can occasionally produce a surprise,” said Larry Sabato, director of the University of Virginia’s Center for Politics.
at 6:58 AM

Email ThisBlogThis!Share to TwitterShare to FacebookShare to Pinterest
Labels: News

Chairman Steele's Message To The Grassroots On Republicans Gaining Control of the U.S. House