"I urge the president to order the DNC to suspend these tactics." 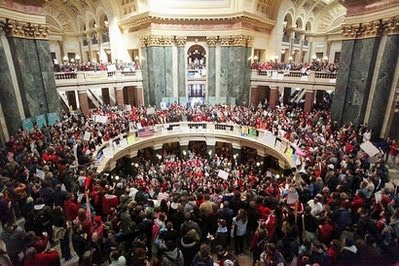 Boehner released a statement on Thursday afternoon backing Walker and his package of aggressive labor reforms that would force increased contributions by state workers to benefits and pension plans, and limit collective bargaining rights for some.

“Republicans in Congress — and reform-minded GOP governors like Scott Walker, John Kasich and Chris Christie — are daring to speak the truth about the dire fiscal challenges Americans face at all levels of government, and daring to commit themselves to solutions that will liberate our economy and help put our citizens on a path to prosperity," Boehner said in a statement. "I’m disappointed that instead of providing similar leadership from the White House, the president has chosen to attack leaders such as Gov. Walker, who are listening to the people and confronting problems that have been neglected for years at the expense of jobs and economic growth...."

The GOP Speaker referred specifically to an interview President Obama gave on Wednesday to Milwaukee television, in which he called the new law an "assault on unions." What's more, the Wisconsin chapter of the president's political arm within the Democratic National Committee (DNC), worked to promote rallies against the new law.

Boehner called on Obama to have the DNC stand down in Wisconsin.

"The White House has even unleashed the Democratic National Committee to spread disinformation and confusion in Wisconsin regarding the governor’s courageous actions," he said. "I urge the president to order the DNC to suspend these tactics."


MADISON, Wis. – Faced with a near-certain Republican victory that would end a half-century of collective bargaining for public workers, Wisconsin Democrats retaliated with the only weapon they had left: They fled.


Discussions:
◼ Wisconsin's Democrat Legislators Go on a Road Trip, Hold Awesome Toga Party, Then Check Out Otis Day and the Knights at the Dexter Lake Club director blue
◼ After all those efforts to paint Tea Partiers as using violent images and rhetoric, these pictures from Madison have got to hurt. at althouse, there are many posts on the day's events, lots of pics, and discussion.
◼ Wisconsin governor to fugitive Dems: Do your job, chumps; Video: Tea partier confronts runaway Dem - hotair
◼ Unions want to overturn election result - Conservative Talk


Walker, remember, is not removing unions' fundamental power to bargain for wages. He is demanding that state workers put 5.8% of their wages toward retirement and that they cover 12.6% of their health care premiums, which would still have them paying more than $100 less a month than the average schmoe. He is also proposing that elected officials determine the shape of employee benefits without having to bargain them, and this as much as the added cost has unions crying "unfair."