Project Gunrunner Got Stimulus Money. We need to know who was responsible for this. 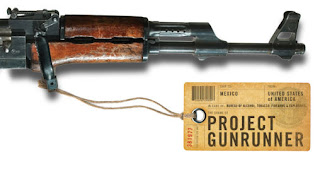 
Eric Holder took Gunrunner credit for himself and the rest of the Obama administration.

◼ In the text of the American Recovery and Reinvestment Act of 2009, otherwise known as the “Obama stimulus...” an earmark of ten million dollars for the Bureau of Alcohol, Tobacco, Firearms, and Explosives was rolled into the bill. - John Hayward/Human Events


Part of that earmark came from House Resolution 495, the Southwest Border Violence Reduction Act of 2009. This bill explicitly included $15,000 in funding for Project Gunrunner.

That funding did indeed make it into the Obama stimulus act:

For an additional amount for ‘State and Local Law Enforcement Assistance’, $40,000,000, for competitive grants to provide assistance and equipment to local law enforcement along the Southern border and in High-Intensity Drug Trafficking Areas to combat criminal narcotics activity stemming from the Southern border, of which $10,000,000 shall be transferred to ‘Bureau of Alcohol, Tobacco, Firearms and Explosives, Salaries and Expenses’ for the ATF Project Gunrunner.

We need to know who pushed this Gunrunner funding into the Obama stimulus, and then the President must be made to formally admit – under oath if necessary – either he knew about Project Gunrunner all along… or he had absolutely no idea what was contained in the trillion-dollar stimulus package he boasted of passing without a single Republican vote.

◼ Too bad to check: Project Gunrunner was funded by … the stimulus - HotAir


...which member(s) of Congress decided to earmark $10 million for Gunrunner and what they thought would be done with the money. Someone in the executive branch must have requested the funding for the ATF. Who?

◼ Allen West: "The President Needs To Realize That Eric Holder Needs To Be Removed" HotAir Pundit


"This is just another sad chapter in the Eric Holder book of ineptness and incompetence," West said. "Eric Holder needs to be brought before an investigative committee and if those charges are warranted he needs to be held accountable.

"At least the president needs to realize that Eric Holder needs to be removed from the Department of Justice … or else it appears President Obama is complicit and in approval of the actions of his attorney general,"