HHS pushes out cash ahead of ruling 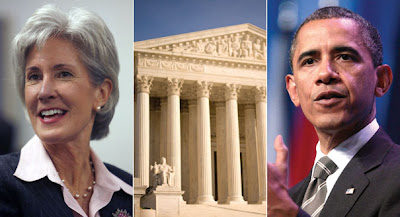 ◼ Conservatives wanted the White House to stop spending on the health care law until the Supreme Court rules on whether it’s constitutional.

But the administration has forged ahead, spending at least $2.7 billion since oral arguments in the case ended on March 28. That’s more than double the amount that was handed out in the three-month period leading up to the arguments, according to a POLITICO review of funding announcements from the Department of Health and Human Services.

While much — if not all — of this funding was in the pipeline well before March, the timeline for handing out specific funds is not set in stone, which gives the agency leeway over the kinds of dollars it has been handing out.

And the stakes have increased as the date of a Supreme Court ruling approaches, because money that is spent won’t have to be repaid, most likely. But remaining funds will dry up if the court strikes down the law.

The court is expected to announce its decision next week.

The $2.7 billion includes grants and awards that have been handed out since the Supreme Court arguments — including more than $90 million in funds for health insurance cooperatives that HHS announced Friday afternoon.

By contrast, the administration gave out about $1 billion in grants, loans and other awards during the three months before the Supreme Court arguments.
at 11:25 PM