◼ Last November, investigative journalist Sharyl Attkisson issued a series of tweets in an attempt to untangle the web of Benghazi talking points woven by the CIA, the State Department and the White House. Months later, she’s at it again. Are we any closer to knowing the truth, or is it time to settle for Jay Carney’s “blame Romney” spin? - Twitchy

Saturday morning Patrick Howley of The Daily Caller dropped another nuke on the fire that is Benghazi-Gate. Howley connects the dots surrounding a number of recent leaks coming of out CBS News about the fate of its award-winning investigative reporter, Sharyl Attkisson.

From the beginning, Attkisson has been one of the few mainstream journalists willing to dig into the September 11 terror attack in Libya, and the Administration's response to it. Fearing the story might lead exactly where it did yesterday with Jonathan Karl's bombshell report, the mainstream media has poured most if its energy into wishing the story away or playing Palace Guard for the White House.

Attkisson's dogged pursuit of the truth has not only pitted her against a media desperate to protect Obama, but also, apparently, against her bosses at CBS News, one of whom is the brother of a top Obama official.

Moreover, CBS News president David Rhoades is not only the brother of President Obama's national security advisor, Ben Rhoades, but ABC News reports that Ben Rhoades was very much involved in the editing of the now-infamous CIA talking points.


Neither the White House nor CBS News responded to requests for comment for this report.

One of the mainstream media journalists whose pursuit of the truth has been truly tenacious and nonpartisan is CBS News' Sharyl Attkisson. Her tough reporting has made life difficult for everyone from Hillary Clinton to the Bush administration and Congressional Republicans. She's also been relentless on the Obama administration's Fast & Furious gun-running scandal -- and, of course, Benghazi. As we mentioned this week, Attkisson's tough investigative journalism is starting to bother unnamed CBS News executives. Here's Politico's scoop, in case you missed it:

But from where Attkisson is sitting, there are actually two Goliaths, one of which is almost entirely absent from the Post profile. The second Goliath is CBS News, which has grown increasingly frustrated with Attkisson's Benghazi campaign. CBS News executives see Attkisson wading dangerously close to advocacy on the issue, network sources have told POLITICO. Attkisson can't get some of her stories on the air, and is thus left feeling marginalized and underutilized. That, in part, is why Attkisson is in talks to leave CBS ahead of contract, as POLITICO reported in April. Farhi mentions "internal conflicts" in the final paragraph, though he seems to dismiss them. The "internal conflicts" are indeed real -- Attkisson is still eyeing an exit, according to sources -- and provide important context for today's piece.

Richard Grenell: Both ABC and CBS presidents have SIBLINGS that work for Obama at the White House j.mp/10q8w85

Unsurprising Media Consensus: ‘Shut Up About Benghazi, You Stupid Republicans’ 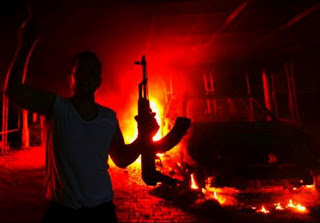 ◼ The fix was in, and the Piers Morgan Network might as well change its slogan to, “CNN: What Difference, At This Point, Does It Make?” - The Other McCain

No matter what the witnesses said, under no circumstance were the major news organizations that have spent the past five years as de facto members of the Obama campaign committee going to treat this hearing as actual news. In fact, the only TV reporter not employed by Fox News who has treated the Benghazi cover-up as a legitimate story — ◼ Sharyl Attkisson of CBS — is being treated like an unprofessional pariah by her own network, while Chuck Todd of NBC News quite literally laughs off criticism of the Obama administration’s handling of the Benghazi attacks.

Really, they out-did themselves on this one. Check out the “Don’t Bother to Read This Dull Story” headline from the New York Times: ◼ Official Offers Account From Libya of Benghazi Attack

Here’s another way you might headline the story, if you actually wanted to get readers to, y’know, read the story: ◼ VIDEO: Benghazi Whistleblower Gregory Hicks Describes ‘Saddest Phone Call’ That Ambassador Stevens Died

Unless you saw that testimony — which was just one highlight of a six-hour hearing that the major networks did their best to ignore or dismiss as mere politics — you would have no reason to suspect how riveting it was, if all you saw was that bland New York Times headline.

◼ HOW DID REST OF THE MEDIA COVER IMPORTANT BENGHAZI HEARINGS? TAKE A LOOK - The Blaze

So, how did the mainstream media cover the story? Well, kind of like it has since the attack occurred — lightly. TheBlaze conducted a review of various outlets’ coverage on Wednesday night at around 8 p.m. CT and took screengrabs of several front pages and accumulated some video. Let’s just go outlet-by-outlet, print and TV, and analyze the coverage.... at the link
at 10:09 AM

This is a MUST READ bombshell. See also her Twitter feed. #journalism @SharylAttkisson

For some fine work on Benghazi, go to profile page of @sharylattkisson and read the tweets & follow the links.

Indeed. CBS’ Sharyl Attkisson is continuing her fierce and fearless coverage of Benghazi.

The emergence of a number of whistleblowers who have come forward to refute the claims made by some members of President Barack Obama’s administration relating to the September 11, 2012, attack on an American consulate in Benghazi does not directly implicate the White House in a cover-up. They do, however, demolish the politically-motivated allegations by a slew of commentators on the left who asserted that those reporters doggedly investigating the American response to the attack were onto something. Those left-of-center commentators who dismissed the investigation into the Benghazi attack as a right-wing delusion animated by a personal hatred of the president have never looked more vacuous.

...Make no mistake, the narrative that clears the Obama administration from culpability in the failure to save American lives in Benghazi is collapsing.

Extraordinary claims require extraordinary evidence, as the saying goes. Those on the right who would leap to the worst conclusions about the White House’s complacency in the attack on the Benghazi consulate cannot yet point to a smoking gun to support those claims. However, the kneejerk instincts of left-leaning partisans to impart malicious motives to those alleging a cover-up of the details of the Benghazi attack are now grasping at straws. Their politically-motivated objective — the destruction of the credibility of Obama’s opponents in an election year – has been laid bare.
at 10:12 AM