France’s Front National leader Marine Le Pen pinned the blame for the killing of 12 people in Paris yesterday on Islamic radicals, as mainstream leaders tried to downplay the religious dimension of the attack. 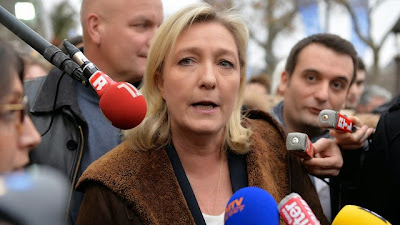 While President Francois Hollande called for national unity in an attempt to deter the public from demonizing the country’s 5-million strong Muslim community, Le Pen said France has to confront the beliefs of the gunmen who stormed the offices of satirical magazine Charlie Hebdo.

“Time’s up for denial and hypocrisy,” Le Pen, who has railed against immigration, said in a video posted on her party’s website. “The absolute rejection of Islamic fundamentalism must be proclaimed loudly and clearly.”
at 6:00 PM