The top structure of the Democrat National Committee is collapsing

The top structure of the DNC is collapsing https://t.co/7Pua0d4gAT

Chief Executive Officer Amy Dacey, Communications Director Luis Miranda and Chief Financial Officer Brad Marshall have each left the DNC less than 100 days out from the general election. The departures come a week after hacked DNC emails, made public by WikiLeaks, showed party officials conspiring against Bernie Sanders throughout the Democratic primary.
at 7:23 PM

The Obama administration secretly organized an airlift of $400 million worth of cash to Iran - Wooden pallets stacked with euros, Swiss francs and other currencies were flown on unmarked cargo plane...

The Obama administration secretly organized an airlift of $400 million worth of cash to Iran https://t.co/o32BFH35sy

Why I could not possibly care less about what Trump said about Kzir Khan, and why no small-d democrat should either https://t.co/lagFLbPR72

...There is some upside for Trump -- if the public can completely forget Hillary is an unindicted but declared felon who put American national security secrets into the hands of the Russians, Chinese, and Islamist enemies of the US in a couple of weeks, then the public could likewise forget whatever "It's a little chilly in here so let me set myself on fire for a little warmth" statement Trump has #ShockedTheBourgeoisie with this week....

"After it all, she lied to the world about what happened to cover up the role of Radical Islam." https://t.co/6Op5ucU0uC

During the GOP convention, CNN cut away from the victims of illegal immigrant violence. They don’t want them heard. https://t.co/EHRiLkQDWD

@sarainitaly Democrats' sudden interest in Gold Star parents is no doubt cynical & convenient. But Trump didn't have to react like he did.

In defense of Trump in his tussle with the 'Gold Star' Khan family https://t.co/1tA5dZlUYg pic.twitter.com/sOAGqyuJ5Y

What a total fraud: #kahn is an immigration lawyer who essentially sells green cards for families to enter the U.S. #CanYouHearUsNow

Khizr Khan deleted his website after Matt Boyle reported on it https://t.co/pFae5MsnjN

The Chairman who stepped down and recommended Hillary's campaign co-chair Debbie Wasserman-Schultz to succeed him was... Tim Kaine.

Julian Assange: Hacked Emails Include Info On Hillary’s Arming of Jihadists, Including ISIS, in Syria

Julian Assange: Hacked Emails Include Info On Hillary’s Arming of Jihadists, Including ISIS, in Syria https://t.co/dLE7OTpVuW

Obamacare Continues to Raise Premiums Across the Country

Obamacare Continues to Raise Premiums Across the Country https://t.co/1qREn20gc8 via @DJAliMeyer

Email ThisBlogThis!Share to TwitterShare to FacebookShare to Pinterest
Labels: Cost of Living, ObamaCare, Pass It To Find Out What's In It, Skyrocketing Costs

WikiLeaks President Julian Assange appeared on NBC’s Meet The Press to answer questions about the latest email leaks from inside the DNC showing the Democrat Party was conspiring against candidate Bernie Sanders.

It's the Supreme Court, stupid

Of course I am voting for Donald Trump. You should be too if you are a conservative.... If Hillary Clinton wins, the Left gavels in a solid, lasting, almost certainly permanent majority on the Supreme Court. Every political issue has a theoretical path to SCOTUS, and only self-imposed judicial restraint has checked the Court's appetite and reach for two centuries.

That restraint will be gone when HRC's first appointee is sworn in. Finished.

...there is a positive case for Donald Trump, a third prong in the case for working for Trump's election: He brings 3,000 political appointees with him, and the first two — Indiana Gov. Mike Pence as VP and New Jersey Gov. Chris Christie has chief of the transition — telegraph that the vast majority of his team in the executive branch (and his appointees on the courts) will be conservatives.
at 7:32 AM

It is an eye-opening field guide to an unruly and hard-to-understand group, many of them born and bred Democrats.

I wonder what would happen if you used a derogatory term for blacks in a headline? Media double standard at play. https://t.co/h57QndRhGd

.@nypost: "Why ‘white trash’ Americans are flocking to Trump?" https://t.co/qdodnE52AQ

maybe they're tired of being called 'white trash?'

This University Has a Name For Enforcing Political Correctness And It's Straight Out Of 1984 https://t.co/933hZCrGQJ pic.twitter.com/cBCRwnhMvx

The U.S. is now conducting air strikes against #ISIS in #Libya

One in 10 DNC superdelegates were registered lobbyists

Hillary Called Benghazi Mom a Liar, But Media Freak Out over Trump

Benghazi Mother Pat Smith on Khizr Khan: ‘I Was Treated Like Dirt’ by Hillary Clinton! https://t.co/p5WyqlWHDz

Hillary Called Benghazi Mom a Liar, But Media Freak Out over Trump on Muslim Parents https://t.co/D4zEqqKC1q

Wow! Muslim Dad who Attacked Trump Says Terror “Has Nothing to Do with Islam” (VIDEO) https://t.co/YJsAIPGBK5 via @gatewaypundit

Khizr Khan Attacks Trump Again, Claims He Is Person “Without A Soul” https://t.co/ddKCjnhWHk

CLINTON ON BENGHAZI MOTHER: SHE MAY NOT FULLY RECALL WHAT I TOLD HER... https://t.co/9NJuc1x9J2

NSA has ALL of Hillary's emails, says agency architect: 'If the FBI really wanted them they can go into that database and get them right now'

Are you shocked? The man who developed the surveillance program for the National Security Agency is now spilling... https://t.co/wm5rD0QlK2

The National Security Agency (NSA) has “all” of Hillary Clinton’s deleted emails and the FBI could gain access to them if they so desired, William Binney, a former highly placed NSA official, declared in a radio interview broadcast on Sunday.

Speaking as an analyst, Binney raised the possibility that the hack of the Democratic National Committee’s server was done not by Russia but by a disgruntled U.S. intelligence worker concerned about Clinton’s compromise of national security secrets via her personal email use.

Binney was an architect of the NSA’s surveillance program. He became a famed whistleblower when he resigned on October 31, 2001, after spending more than 30 years with the agency.

It's a 4 Pinocchio day for Clinton. https://t.co/pzoOlYkOWn

"We were wrong." ObamaCare architect admits their war on independent physicians has increased costs.

"We were wrong." ObamaCare architect admits their war on independent physicians has increased costs. https://t.co/HhTcnnDGJD

Email ThisBlogThis!Share to TwitterShare to FacebookShare to Pinterest
Labels: #FAIL, Nancy Pelosi, ObamaCare, Pass It To Find Out What's In It, President/candidate Obama, Skyrocketing Costs

How many PETA members were enthusiastic cheerleaders for Chavez?

Dinesh D'Souza: "I'm the only one that smells a rat when the Clintons go from $0 to $300m on gov't salaries"

I'm the only one that smells a rat when the Clintons go from $0 to $300m on gov't salaries. Live on @FoxBusiness. pic.twitter.com/rjExHBTpCj

.@HillarysAmerica might just be the scariest movie you see all year... https://t.co/oyHtWPYGLrhttps://t.co/8aRGNwsmhB

.@rushlimbaugh on #Hillary's America a must see movie by @DineshDSouza https://t.co/3wS4o3T7cB

In 1973, cereal heiress Marjorie Merriweather Post donated her 128-room Palm Beach mansion to the U.S. government to be used as the winter White House. And if the house's current owner Donald Trump wins the presidency in November, that's exactly what it will become. Here, T&C takes a look at the history of the property.
at 8:30 AM

WHAT A MONTH! JULY WAS A NEWS CYCLONE

WHAT A MONTH! JULY WAS NEWS CYCLONE https://t.co/lMqQ5fC43M

Rename it "The hacked convention". pic.twitter.com/GABJ8nRHki

"Hillary is the best #Changemaker I know!" - Bill Clinton 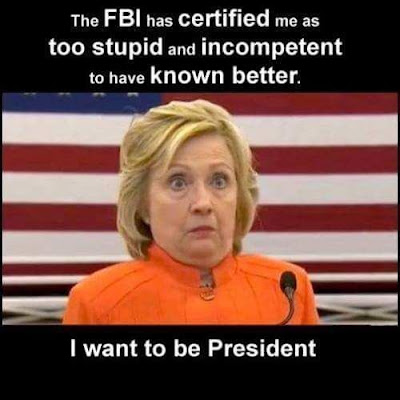 Email ThisBlogThis!Share to TwitterShare to FacebookShare to Pinterest
Labels: cartoons

Nate Silver Declares It Time For Democrats To Panic

That has to sting a little coming from Jimmy Carter#neverhillary pic.twitter.com/hrbJ7Ww7zs

“@NateSilver538 Declares It Time For Democrats To Panic.”https://t.co/YBNB8wPKJz

Trump Got Hillary To Admit Her Emails Were A National Security Riskhttps://t.co/3X6mF2vwqT

“Russia, if you’re listening, I hope you’re able to find the 30,000 emails that are missing,” Trump said to a room of TV cameras at Trump National Doral. “I think you will probably be rewarded mightily by our press…By the way they hacked, they probably have her 33,000 e-mails. I hope they do. They probably have her 33,000 e-mails that she lost and deleted because you’d see some beauties there. So let’s see.”

The immediate reaction across the political spectrum is that it’s insane to publicly hope and urge a hostile foreign power to obtain and release national security secrets. Which it is, but that’s Trump being Trump. What the Clinton campaign did next was make a colossal error:


The Clinton campaign was quick to respond. Said advisor Jake Sullivan: “This has to be the first time that a major presidential candidate has actively encouraged a foreign power to conduct espionage against his political opponent. That’s not hyperbole, those are just the facts. This has gone from being a matter of curiosity, and a matter of politics, to being a national security issue.”

As Sean Davis noted, the Clinton camp just walked right into Trump’s trap, whether or not he knew he was setting one. For the past year, Hillary’s defense of her private email server has been that the whole thing was a nothingburger that put no sensitive information at risk. Originally she claimed that the emails on her server were harmless things like yoga schedules. ​FBI Director Comey contradicted that, publicly concluding both that there was significant senstive information in the emails and that there was no way to know if they had fallen into hostile hands. And now, this morning, her own campaign admits that it would be “a national security issue” for Russia to gain access to those emails....
at 7:00 AM

'THEY ... CLING TO GUNS OR RELIGION': "It was thought at the time to be a gaffe. Now it’s apparently a strategy." https://t.co/mGU7Hl9mhv

But Obama said everything was ok? pic.twitter.com/hPqkWFmV5y

NY Post: Why Didn't the Democrats Even Mention the Clinton Foundation? - Breitbart https://t.co/5km5AyS59a