Reconciling ‘Spygate’ With The ‘Soft Coup’

...At the beginning of October, more than four months into her campaign, AOC’s fundraising had been anemic. Excluding an in-kind contribution from Chakrabarti, she’d raised only $3,032.75 but had already spent $27,591.27 — more than half of which she’d paid to Chakrabarti’s Brand New Congress LLC. By the end of 2017 she’d spent $37,249.94 but raised only $8,361.03. That’s a lot of money to stick on a credit card. Since no loans are recorded on her campaign books, presumably either AOC or Roberts was fronting the necessary cash....
at 3:54 PM

#ALERT #MaduroRegime has begun a massive violent crackdown on the border with the Brazil. I have been informed 4 civilians dead & 24 injured as of this moment. #23FAvalanchaHumanitaria

The Venezuelan Armed Forces present themselves on the Tienditas Bridge, bordering with Colombia.

A clear show of force to block the entrance of humanitarian aid. Very strange this goes along with a 'message of peace, harmony and love'...

BREAKING: Number of injured on the Venezuela-Colombia border rises to at least 285, Colombian government says

Maduro gunships are threatening to fire on a ship sailing from #PuertoRico which is in international waters with 300 tons of food & medicine & at least 6 U.S. citizens on board. #barcopuertorico

BREAKING: Venezuelan ship threatened to open fire against #BarcoPuertoRico, a ship that is carrying humanitarian aid from Puerto Rico to Venezuela, according to Puerto Rico Governor, @ricardorossello who’s instructed the ship to leave the area to ensure crew & passenger safety.

26 members of regime forces deserted Maduro so far today. The Venezuelan side of the border with #Colombia is now almost entirely controlled at this point by Pro-Maduro gangs & Cuban regime advisors. #23FAvalanchaHumanitaria

Each of the trucks burned by Maduro carried 20 tons of food & medicine. This is a crime & if international law means anything he must pay a high price for this. #23FAyudaHumanitaria https://t.co/IrGzrOUX09

.@Nicolasmaduro has now threatened U.S. citizens for attempting to help the people of #Venezuela and that will not be tolerated.

The U.S. will stand against the threats of gangs and thugs and will ensure the safety of our citizens! https://t.co/cAqev1kn28

Watch these young members of the National Police cry as civilians beg them to allow them to bring humanitarian aid into #Venezuela.

#URGENT: Pro-Maduro gang,at the direction of Cuban agents have used firearms against civilian aid workers at the Simón Bolívar bridge.

Military leaders are cowards if they stand by & allow foreign govt & street criminals to kill their own people. #23FAvalanchaHumanitaria

Another member of Natl Guard leaves #Maduro. This is why he is increasingly relying on Pro-Regime gangs. https://t.co/tUIAVDANfe

The opposition had high hopes for today in #Venezuela but little aid got through today and only 60 soldiers out of more than 230,000 deserted. In Caracas Nicolas Maduro danced on stage in front of his supporters. pic.twitter.com/SczVLdhbA8

This is my story of 5 years in Venezuela. What I saw wasn’t Socialism. It was kleptocracy—the rule of thieves https://t.co/vA0iiYJpeH @WSJ

Maybe this historical reference will help people outside of Venezuela understand what has befallen us@edoilustrado pic.twitter.com/S2HTFKlXbH

Watching the latest horrors in Venezuela today and it makes me even more furious that there's scores of lefties in Congress and the press that SIDE with Maduro and think it's evil, imperial, etc. for the United States to stand up for his regime's disregard for human rights

This is literally a hostage situation. Venezuelans are locked in a socialist nightmare.

Some politicians continue to support this awful dictator. That must stop.

I support POTUS getting Venezuelans the help they desperately need - we all should. https://t.co/Q0QYeRZlyK

God Bless the people of Venezuela!

The people of Venezuela stand at the threshold of history, ready to reclaim their country – and their future.... pic.twitter.com/ajxd1EN64c

We're here at the CAGOP Convention... 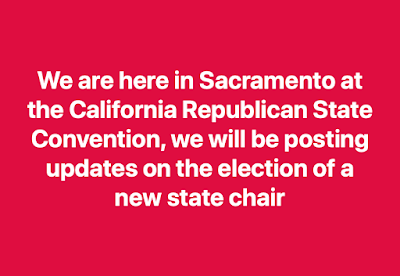 You’ve definitely seen Steve on the show: “The Next Revolution.” It’s one of the most popular shows on Fox.

He was director of strategy for David Cameron, the former British prime minister and former leader of UK’s Conservative Party. pic.twitter.com/MOc0mDqE8W

Neurosurgeon & author Ben Carson is the keynote speaker for our Speaker Series event. Millions of people have fallen in love with his story of personal triumph: from an impoverished upbringing to serving as director of pediatric neurosurgery at Johns Hopkins Children’s Center. pic.twitter.com/UHgMYK0Z81

A big topic at #CAGOP2019 will be about CA's affordability crisis and the millions of young Californians struggling to make ends meet --> Six in 10 young California voters say they can't afford to live herehttps://t.co/pQ9CIcXWG0

“If you put the federal government in charge of the Sahara Desert, in 5 years there'd be a shortage of sand.”

We’re excited to have Congresswoman @Liz_Cheney with us today for lunch. After just one term in office, she was chosen by her fellow Republicans to serve as the chair of the House Republican Conference- the third highest-ranking position. #CAGOP2019 #CAGOP19 pic.twitter.com/UuGtXBv2Dz

Last night at the #cagop convention nine former chairmen were honored for their service to the @CAGOP. Classy. pic.twitter.com/k6dXPjHLOt

Check out @AssemblyGOP@TylerDiep's take on Gov. Newsom's unfair water tax (another hot topic at #CAGOP2019 #CAGOP19) -->
There is nothing ‘fresh’ about a new water taxhttps://t.co/OwhG3pUO0P

“The California GOP Chairman decides the delegates that go to the [National] Convention.” pic.twitter.com/id3JWCdpm8

All while kicking socialism in the pants. 🇺🇸🇺🇸🇺🇸 https://t.co/uaQk9srky0

The California GOP is on life support. https://t.co/ZSfCrVxTsP

The one-year-old in Chicago isn't a star like #JussieSmollett. 2 dozen detectives weren't assigned to his case...

Make an example of Jussie Smollett, in criminal court and Hollywood alike@TianaTheFirst https://t.co/BLyEZpT5RG

Chicago Mayor Rahm Emanuel to Jussie Smollett: "If you want to get paid more, get an agent. But don't use your sexual orientation, don't use your race, and have everybody's sympathies come to you, and it turns out none of that was true." https://t.co/JzJLWJNwc4 pic.twitter.com/avlb4eICtm

The one-year-old in Chicago isn't a star like #JussieSmollett. 2 dozen detectives weren't assigned to his case. The Democratic left & media handmaidens didn't bend his narrative. He's just a little boy from Chicago, shot in the head. https://t.co/qFZFflaAny

Being a Liberal Journalist Means Never Having to Say You're Sorry https://t.co/LL2jv11LHz Bernie nails it, lib media never apologize only justify their false actions.

Pandering: The reparations proposals are not intended to mitigate evil. They are intended to make Elizabeth Warren . . . or Kamala Harris, or Kirsten Gillibrand . . . president of the United States

The reparations proposals are not intended to mitigate evil. They are intended to make Elizabeth Warren . . . or Kamala Harris, or Kirsten Gillibrand . . . president of the United States. https://t.co/4ETuzG8Amq via Kevin Williamson pic.twitter.com/Z7BlYpGZ6p

"Socialism promises a better future, but it always returns to the darkest chapters of the past." pic.twitter.com/ShbWejmWYg

Socialism always promises unity but delivers division and hatred. It promises a better future—and inevitably returns to the darkest chapters of the past. President Trump's message to Maduro is simple: "Let your people go."

Trump signed a directive today to establish his Space Force as the sixth branch of the military.

Trump signed a directive today to establish his Space Force as the sixth branch of the military.

Congress has the final say on whether it will join the other five branches (Army, Navy, Marine Corps, Air Force and Coast Guard) https://t.co/mDFEcpb0ek pic.twitter.com/mnYlDFiMkc

More than 20,000 people demonstrated in Paris in response to the continuing surge of antisemitism in France

More than 20,000 people demonstrated in Paris in response to the continuing surge of antisemitism in France. https://t.co/NimS3ilKom

How Economic Freedom Has Benefited Women

“It is capitalism that ended the stranglehold of the hereditary aristocracies, raised the standard of living for most of the world and enabled the emancipation of women.” - Camille Paglia https://t.co/e4XgKgK5sQ

Anti-Semitism has spread through the Islamic world like a cancer

Anti-Semitism has spread through the Islamic world like a cancer, @FareedZakaria writes https://t.co/VUu6buBrV6

These candidates will say anything to get your vote. #Gutfeld pic.twitter.com/Bz1MM1cuat