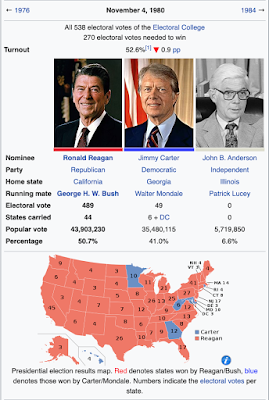 Carter's unpopularity and poor relations with Democratic leaders encouraged an intra-party challenge by Senator Ted Kennedy, a younger brother of former President John F. Kennedy. Carter defeated Kennedy in the majority of the Democratic primaries, but Kennedy remained in the race until Carter was officially nominated at the 1980 Democratic National Convention. The Republican primaries were contested between Reagan, who had previously served as the Governor of California, former Congressman George H. W. Bush of Texas, Congressman John B. Anderson of Illinois, and several other candidates. All of Reagan's opponents had dropped out by the end of the primaries, and the 1980 Republican National Convention nominated a ticket consisting of Reagan and Bush. Anderson entered the race as an independent candidate, and convinced former Wisconsin Governor Patrick Lucey, a Democrat, to serve as his running mate.
at 7:30 AM