Into the 30s: Obama Approval Rating Drops To 39% in New Zogby Poll

President Barack Obama’s job approval rating has dropped to the lowest point of his Presidency at 39%, and in potential match-ups with Republicans in 2012, he trails Mitt Romney, Jeb Bush and Newt Gingrich and is just one point ahead of Sarah Palin.

The percentage of likely voters saying the U.S. is on the wrong track is now the highest since Obama took office at 69%. 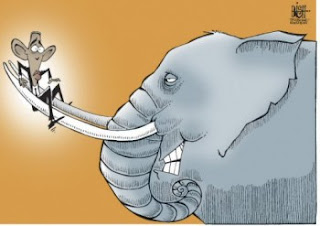 ◼ Most Held by GOP in over 60 Years - Ed Driscoll
◼ Oritz Concedes TX-27 to Farenthold; GOP Reaches Historic 241 Seats in House
...Politico writes: “Republicans have now won at least 62 House seats. The GOP leads in one of four unresolved races.” Meanwhile, in NY-25, where Republican Ann Marie Buerkle leads by 567 votes after the absentees were counted, the chairman of the Onondaga County GOP called on Democrat incumbent Rep. Dan Maffei to concede...
at 8:57 PM