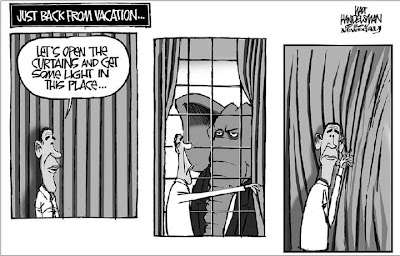 ◼ GOP-Controlled House Kicks Off New Session by Reading Constitution Aloud
Though it has been inserted as text into the Congressional Record before, the supreme law of the land has never been read aloud before in the body known as "the People's House."
The man responsible for the exercise, Rep. Bob Goodlatte, R-Va., says it's more than just a simple civics lesson.
"This is a very symbolic showing to the American people," said Goodlatte, "and it's a powerful message to members of Congress. We are a nation of laws, not of men."
◼ Have You Read the Constitution?
◼ READ the Constitution pdf
◼ Constitution reading provokes political tussling
at 3:24 PM

Email ThisBlogThis!Share to TwitterShare to FacebookShare to Pinterest
Labels: Congress, In The News, John Boehner

◼ Video: The moment we’ve all been waiting for - HotAir
◼ Mr. Speaker - Legal Insurrection
at 1:35 PM

Email ThisBlogThis!Share to TwitterShare to FacebookShare to Pinterest
Labels: In The News, John Boehner

Senators Reid, Durbin, Schumer, Murray and Stabenow:
Thank you for reminding us – and the American people – of the backroom deal that you struck behind closed doors with ‘Big Pharma,’ resulting in bigger profits for the drug companies, and higher prescription drug costs for 33 million seniors enrolled in Medicare Part D, at a cost to the taxpayers of $42.6 billion.

The House is going to pass legislation to repeal that now. You’re welcome.

The call rang out February 19, 2009, when Rick Santelli, a Chicago stock commentator, voiced his now famous rant over the bail out of delinquent mortgages. His “call” was for other outraged Americans to push back, against the moral and economic tyranny of big government, with the modern day equivalent of a Boston Tea Party.

Today our government rewards bad behavior at the expense of those who play by the rules, pay their taxes and live responsible lives. For decades a collective “we” allowed this assault to our civil liberties and family values, the growth of all levels of government and faceless regulation, and the theft of our property through monumental debt.

Overnight an electronic firestorm turned frustration into action as websites sprang up, emails swept the nation and self-proclaimed patriots began networking. The common denominator to this grassroots movement is liberty from government?s unconstitutional control over our lives. These patriots esteem the Constitution, demand smaller government, understand the importance of free markets, and expect fiscal responsibility. These values strike at the core of how they live their lives.

Russia watchers have been pondering for months: Will Putin run for president again in 2012, or won't he? The verdict in the case of Mikhail Khodorkovsky last week should settle it. Putin will run...

...Criticism of the verdict by governments and news media outside of Russia was dismissed by the Foreign Ministry as "interference" in a domestic issue. Typical of Putin's style, the critics were invited to mind their own business.

Putin may be able to easily push Medvedev aside and stack the political deck to ensure his 2012 election as president, but the trends are now beginning to move against his the-state-as-bully philosophy and method of operation.

__________
(Note: Peter Hannaford is Chairman of the Humboldt Republican Central Committee. He is also a member of the Committee on the Present Danger. He closely associated with the late President Ronald Reagan. He is now working on a new book titled "Presidential Retreats.")

Peter was closely associated with the late President Ronald Reagan for a number of years, beginning in the 1970s. He was vice chairman of the Governor’s Consumer Fraud Task Force, then the governor’s sole public appointee to the Tahoe Regional Planning Agency’s governing board, then Assistant to the Governor and Director of Public Affairs in the Governor’s Office, Sacramento.

When Mr. Reagan’s second term expired, Peter and another senioir aide, Michael Deaver, founded a public affairs/public relations firm in Los Angeles (Deaver & Hannaford, Inc.) and Mr. Reagan became their lead client. They managed his public program until his election as president. In his 1976 campaign for the presidential nomination, Peter was his co-director of issues and research. In the 1980 campaign he was senior communications consultant to Mr. Reagan.

With the Reagan victory in November 1980, both men could not go into the White House. Mike Deaver did, as deputy chief of staff, while Peter continued with the company to manage it. He movedits headquarters to Washington, D.C. During the Reagan years he was involved in a number of volunteer activities including membership on the United States Information Agency’s Public Relations Advisory Committee, the board of trustees of the White House Preservation Fund, consultant to the President’s Privatization Commission and active in the President’s Private Sector Initiatives program.

After nearly three decades in Washington, Peter returned to his native state of California in 2006.
He remains a member of the board of directors of the Washington-based Committee on the Present Danger and a senior counselor of APCO Worldwide, a Washington-based public affairs/strategic communications firm. Currently, he is chairman of the Humboldt County Republican Party and lives in Eureka.

He is the author of 11 books (most of them about U.S. presidents) and a frequent contributor to opinion magazines and their online editions.

Email ThisBlogThis!Share to TwitterShare to FacebookShare to Pinterest
Labels: In The News, Peter Hannaford